...and Spartans on Attack

This week a monstrosity returns to State College: If ever there was a metaphor for a made up rivalry, it is embodied by the above. I don't want this doctored up file cabinet in the trophy case, and neither should Joe. My guess is that's why we let up a 17 point lead last year in the 4th quarter. Sure, that's the reason.

Playing Sparty at the end of the season is just that; a marker for season's end. There is no glitz of your typical rivalry games, e.g. Michigan vs. OSU. Hell, even this year I would rather be Michigan just for the chance to end our season with a hated rival. And that's the definition of "hyperbole".

Look, if you want to end the season with a bang, don't play for office furniture. A fitting end to this game would be rather ECW-ish. Quite simply, a ladder is placed at the 50 yard line in Beaver Stadium. Jared Odrick launches himself onto the trophy. The MSU and PSU seniors join each other afterwords for a sledgehammer party on the remnants. The splinters are then taken to Canada and buried. And we all do shots.

I would be satisfied.

This season, the game actually means something, but we all know it's an anomaly. For the most part, unless the above is happening or LJ is breaking 2000 yards for the season, the game is meh. Let's make this game worth something. I propose the following trophies/obligations the game should carry with it.

He is arguably the most respected college football coach. His image is the personification of PSU football. I would kick a rabid tiger in the balls to keep the glasses where they are. And so would you. 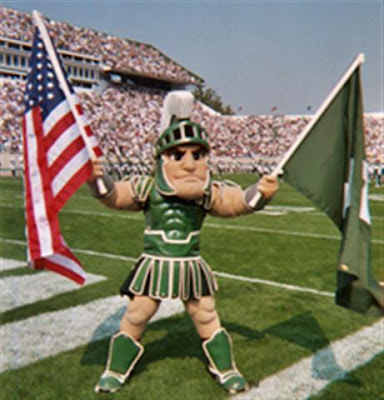 And yes, I know Sparty traditionally does not carry a sword or shield, but both would be easily recognizable representations of MSU tradition. Plus, any of the above would look totally boss hanging in Beaver stadium. Alternatively, the Spartan crest on the MSU Helmet could come off, which holds great double entendre. Too much? Maybe. But then again, scroll up to see what we are currently playing for. 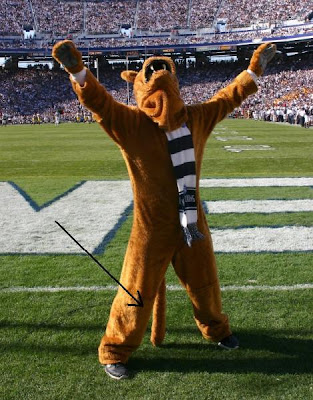 Bear with me here; I know it looks like the Lion is dropping a 2. Losing the last game of the season means that for PSU football games the following year the Lion will go tailless.

Like I said, these are a few ideas that would at least make the game more meaningful in off years. Personally, I really don't know what the Spartan's hold dear and could offer to the matchup, which kind of proves my point.

Sigh...I have a bad feeling about this game regardless. PSU has not lost a game to Sparty at home since joing the Big11 10, but that might change on Saturday. As of late, PSU has been starting out too slow, and the offensive line just has been steadily regressing as the season has progressed. MSU wins because:

EDIT: The Nittany Turkey outdid me, and for that, I hoist my jug of corn whiskey to him. Peep this:

"Wait! I’m getting an inspiration here! After I had my hip replacement surgery, I often wondered what the hospital did with the sawn-off top of my femur. I speculated on whether the surgeon took it home for his dog to gnaw on, or whatever. With Joe’s THR imminent and with it being inextricably associated with the MSU game, perhaps such clashes in the future can be played for “JoePa’s Bone”!"