'Cuse Recap
We won. Awesome. The pain has mostly subsided, and the preseason is over. Let the real season begin.
F$%kin' Iowa, Man
Remember last year when we pantsed OSU on national TV, and then went undefeated coming into Kinnick Stadium? Remember how Iowa had lost to Pitt that season, but had started looking competent the previous week? Remember how that game ended on that cold afternoon? You don't?, Here's a quick reminder: 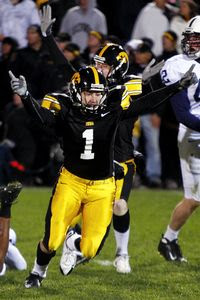 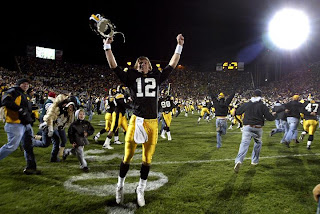 To say the least, last year's matchup was disappointing. The weather sucked, PSU forgot the sideline heaters, and opted to pass into the wind 3 times on it's opening possession. PSU had multiple chances to put this game away in the first half, but kept coming up with field goals. And then Iowa realized that they weren't the team who lost to Pitt. Or something.

I was so depressed after this game that I spent $250 on dinner for me and the ex at the Capital Grille.

But all that is done with. Iowa has been owning our collective keister's now for the better part of the past 10 months, and it ends on Saturday.

Preview
Iowa started the year with a near bedshitting to Northern Iowa. I watched. This wasn't the Iowa team that dominated the backstretch of their schedule and postseason. This was the Iowa team that lost to Pitt. They won on two FG blocks at the end of regulation. The skin of their teeth, indeed.

No, I say throw that game out. The Iowa team that rolls into town on Saturday is the one that blew out Arizona and Iowa state. Let's take a look at the relevant stats from Iowa's two games vs. PSU's season:

Offense
(all stats from ESPN, BSD, and big12sports.com)

For a PSU victory:
PSU needs to limit the turnovers, run the ball, and wreak havoc in the Iowa backfield. Earth-shattering, eh?

For an Iowa Victory:
Keep picking off Clark, stack the line, and dominate special teams.

Other stuff:
Sean Lee is out for the week. Ouch. He would have a field day, considering Iowa dominating LT Bryan Beluga is on the mend.

The good news? Navarro Bowman is back from his groin issues, so that sheds some of the Lee injury evil mojo. But not all.

Other bad news includes Stupar tweaked his ankle in practice this week. I would feel much better with him in the lineup this week.

Intangibles:
PSU has them all-a home game, at night, revenge, and the whiteout. Plus, I heard Stanzi called Jack Crawford's mother a "stink pig".

Final Thoughts:
I have no problems with the PSU offense in this game. However, I do have issues with the defense, the onus of which will be on the defensive line. The tackles have to make up for Lee's presence (or lack thereof), and must get some heat on on Stanzi. The line can handle Iowa's running game, it's just I fear that PSU goes into the dreaded "rush four tired lineman late in the game, back the corners off" EPIC FAIL gameplan. We saw how that ended last year. Rush 4 with a "joker" LB shooting the gaps. Their armor is weak on the left side, and that's where the first point of attack should be. Above all else, exploit the mismatches created by the inexperienced Beluga replacement.

Let's Go Fishing
Iowa reminds me of the King Mackerel, aka the "Kingfish"

Recently, I haven't caught many. When I do, yer for damn sure I light up afterwords.

Posted by drozz at 5:38 PM No comments: Links to this post