Indiana has Its Hoosiers

It's very simple. They are not good. We are playing at home. If PSU comes out less than ready for some angry homicide, I will have lost some faith in the senior leadership on this team.

I turned 29 on Thursday. Again. Every time I turn 29 it hurts just a little bit more. The communion I go through every Saturday with PSU brings me back to younger days, and the pain of age goes away. I can drink whiskey with impunity. I can smoke 300 packs of cigarettes. I can play 80 minutes of MARFU rugby. I can go an entire tailgate without using the port-o-johns. These are but a small few of the feats I am fully capable of on gameday.

Enjoy the game, and LET'S GO STATE.
Posted by drozz at 10:30 AM No comments: Links to this post

Labels: gameday predictions, i am old, i am superman, indiana, psu 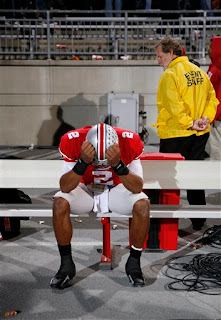 Galen over at TNL is echoing a theme common in the PSU community right now. To give up. The sense of loss and despair from Saturday's upset (ed-great adjective and metaphor) has lowered him to such basement levels of anger and self-abuse that he has sworn off PSU football for the year.
This cannot happen. Not now. Not ever. Galen and Nick do great work for the PSU community, and if half the symbiotic relationship were to quit functioning, the site would cease to have the impact that it currently has.
I don't like the New York Giants. Never have. But Fassel did have one great quote:
"This is a poker game here and I'm shoving my chips to the center of the table. I'm raising the stakes. That's the game and anybody who wants in can play. But I'm upping the ante.''
While I do realize that in professional football, you just have to make it to the playoffs to have a shot at the championship, the quote in itself is pretty inspiring. The message should be evident. Ante up or get out. We have the 6-7 months of non-PSU football to argue about what happened last weekend.
Posted by drozz at 4:47 PM 2 comments: Links to this post

I have been walking on clouds since the Phillies won the World Series. Not much matterred. Eagles? Meh. Flyers? Meh. PSU facing 3 teams we should beat? No problem. O wait....

My congratulations to the Iowa Hawkeyes. We made mistakes, they capitalized. We coached poorly, they did not*. They executed in the redzone, we had drives that stalled.

Again, props to Iowa. And I think I might be in love with Mitch King.

*Except for when D. Williams lined up in shotgun.

Posted by drozz at 12:14 PM No comments: Links to this post