The above picture is of Chief Illiniwek, who was wrongfully removed as the Illinois mascot. Yes, I am bitter about these PC Nazi moves. Was it a badass logo? Scientific studies reveal that yes, indeed it was.

So they went and got rid of the mascot and tradition. Given the same scenario, and I had to chose a new school mascot, I would have gone with The Fightin' Lemans. 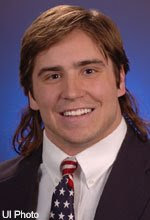 WARNING: In women, prolonged exposure to this picture may result in
spontaneous pregnancy.
Seriously, is there anything more inspiring than this picture? The All-American good looks and haircut to boot. And let us not forget about the awesome necktie. Picture this: it's late in the game, you are down by 6, and exhausted. Or, your planet is being invaded by aliens. Whichever. You turn and see this mullet-god inspiration sprinting toward you, waving a flag, and screaming for you to get up and fight. That would be more than enough to press me through whatever pain and exhaustion I might be feeling.

O, and he was a damn fine linebacker as well.....
On to the football...
One of the most bitter losses I have ever experienced came at the hands of Illinois last year. The scenario was that PSU was coming off of a devastating loss in Michigan, and needed something to pull this team together. Our first drive netted a Kevin Kelly field goal. The ensuing kickoff saw an untouched Arrelious Benn take it 90 yards to paydirt. The lone offensive highlight in game full of errors was Derrick Williams torching the Illinois secondary. The rest was full of Morelli thick-headed turnovers, lack of execution, etc. Given the above, it was weird that we were even still in this game with 27 seconds left. Again, Morelli removed all hope of victory by displaying his trademark unclutch abilities.

O, and Leman had an interception. But I digress.

In short, I just felt empty after that game. These were two games that PSU should have won, but didn't. This year, I want revenge.

Even with the loss of Rashard Mendenhall, Illinois has a few weapons we are to be concerned about:
The Juice
Illinois returns starter Isiah John "Juice" Williams*, who looked somewhat impressive in the opener against Missouri. However, it was probably due to a crappy Missouri defense then anything else. I guess we'll find out when Missouri rolls through its lackluster schedule and hits a bowl game against a real opponent. His numbers through the air: 26/42, 451 yards, 5 TDs, 2 Int. He also rushed 19 times for 10 yards.

Benn
This guy legitimately gives me nightmares. Last year, he was everywhere: 5 rushes for 8 yards, 6 catches for 84 yards and a TD, and a kick return for a TD. Not bad for a freshman.

Daniel Dufrene
Dufrene is off to a good start as a starter for the Illini, averaging 6.7 ypc and 100 ypg. Although he hasn't made it to the end zone this year, has has rolled up the numbers that would warrant attention.

What is most important to remember about last year's fuckup is that we did take Juice out of the game. Outside of a good first quarter, Juice was highly ineffective, and had to be replaced later by some chump named McGee. I have no doubt that our game plan regarding him is to simply keep him in the pocket, and force him to make bad plays. Getting Koroma and Evans back, even in limited roles, will no doubt bolster this stratagem. Other than that, keep a safety (Scirrotto) dedicated to Benn to remove anything over the top, keep an eye on Dufrene, and defensively we should have a good game.

Offensively, the only worry I have about PSU is losing the ball. There have been 11 times thus far the ball has hit the ground; while PSU has been lucky in recovering the majority of them, this is far too many. Add to this that the ball may be slick due to inclement weather, and we have the potential for a nightmare. Last year's game was decided by turnovers, and hopefully history won't repeat itself.

O, and PSU has the small intangibles of a night game and the White Out. Feelin' good about this one.

EDIT: ESPN this morning displayed on its ticker that Koroma and Evans will be playing this weekend dispite their legal infractions. There was no mention that they had both been suspended for 3 games, missed practice, etc.
*"Juice" has turned into a remarkably bad nickname in the past 14 years or so. Might want to go with something else here.
Posted by drozz at 11:58 AM No comments:

My time has been tight what with the end of the fiscal year coming up, so my blogging (or attempts thereof) has been severely curtailed. Yes, I have actually had to do work. So until the road trip next week, please don't expect that much out of me other than the occasional line or two.

My thoughts on the past 4 games?

So there ya have it. We ate our cupcakes, they tasted good, and now onto the conference schedule entree. Selah.

As previously stated, it's very easy to watch PSU football, get lost in the game, and merely look at our players as athletic pawns in a college system. This cannot happen. These boys that lock it up for our entertainment every weekend are real kids. They have back stories, most of them far more colorful than the humble jerseys they don. It's just a shame that most of us will never get so much as a glimpse into their personal lives.

The next student-athlete in the queue for this feature has to be Jack Crawford. 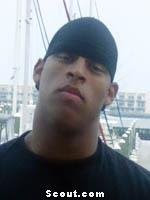 As we all know that Jack is a little late in picking up the game of football; he was born in England, and originally came to America to play basketball. Basically, he has a freakish size/speed matchup (6' 6", 260, 4.55), but is underdeveloped due to lack of experience. This will change under LJ Sr. (See Hali, Tamba).

I recently sat down with young Jack* to write about the odds and ends of his life. The following are just some things that people should know about him:

So there ya have it. Don't be afraid to confront Jack with his personal information, as listed above. I'm sure he will laugh**.