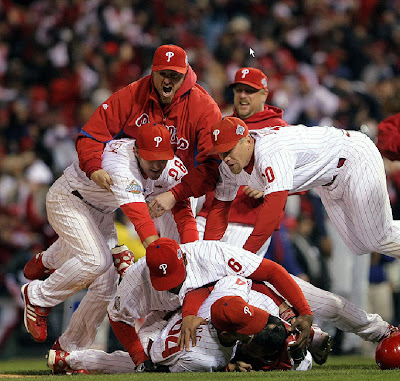 I don't remember the '83 NBA championship, although I do remember the players. I vaguely remember the 1980 World Series. Believe it or not, I wasn't alive for the Flyers' Stanley Cup win in '75. I will always remember and cherish this. And now the spending spree.

And for those PSU alums who were also Pittsburgh fans at the end of the bar, I heard your boos and was immune. You graduated. Grow the fuck up.

For the Mets fan (not Adam, but thanks anyway) who turned around to congratulate me, thank you. Way to humbly represent your fan base. The savages mentioned above could learn a thing or three on how to keep one's dignity.

Thoughts for the Bye Week

This bye week for PSU could not come at a better time. The month of October represented the harshest month in the schedule for the Lions. These past 4 wins have taken its toll physically and mentally on the players and fans. If there was to be a "letdown" game for the Lions, surely it was to come the week after a win in Columbus. Especially if they had to play the surprisingly dangerous Iowa squad.

Personally, I needed the week off. I am going to watch some non-PSU football and relax. On Sunday I will start dealing with Iowa, and not before. I would hope that is what the players are doing as well.

What...A...Game. I wrote after the Michigan game that "Some say that this only makes us stronger. I say bullshit-adversity is faced against good teams in dire situations. When this kind of adversity is overcome, the team gets confidence. " Saturday night is exactly what I was talking about.

So there I sat on the evening before gametime. I had a dual TV setup (went with the PSU game on the HD), my laptop humming along so I could drunkenly post on BSD, and a whole motley of remote controls to various electronic means for enteratainment. I'm pretty sure it was a sin. But I don't care. Nothing was ruining this for me. No distractions. I was watching this game on my terms. And I would do it all over again, provided I did not have tickets to the actual game. Selfish? Definately, but I did not want inferior viewing of the game at a bar, lines etc.

Wow. After I typed the above, I noticed something. That is freakin' weak.

I love the "Noooooooooooooooo" in the background. That being said, Rubin's forced fumble was followed by the smartest football play by an individual I have seen since Westbrook knelt down on the one last year. Tyrell Sales was prone, and the fumbled ball was bouncing near him: 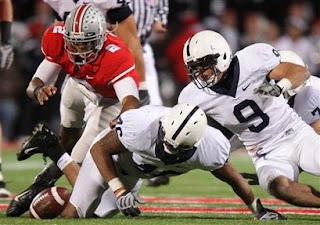 He knew that Pryor or another OSU player would prob get the ball before he could get to it. Instead of trying for possession, he batted the ball further away. 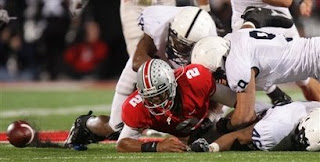 Bowman came up with the ball, and you know the rest.

PSU played brilliantly on defense, and the offense made some plays. Tresselball? Nope, Paternoball. And it worked.

I would be remiss if I didn't give OSU some props. They played one hell of a game.

Quote of the Game:

"I looked at Ohrnberger in the fourth quarter and he looked back at me. And we said, 'We're not losing this game.' " - A.Q. Shipley (seen below) 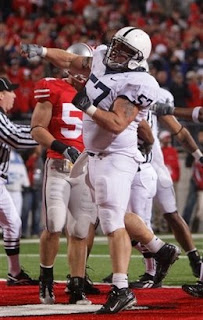 Other than the above, all I have left to say is that I am extremely proud to be a PSU fan. And so help them God, if these kids get in trouble "relaxing" in their bye-week, the backlash will be hell-sent.