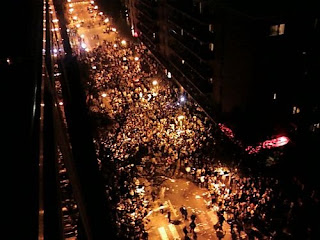 (State College, PA) The tranquil mountain summer of State College was again broken by the sounds of shattered glass as thousands of students took to the streets to vent their anger and frustration with their administration.

While these booze fueled mobs are usually synonymous with Arts Fest, this year it was different. This year, the PSU football coaches had the temerity to go and offer another high school quarterback a scholarship. And on July 10, the news broke: he accepted.

Robert Boldin is now the newest PSU recruit to verbal. He will be joining Paul Jones, another coveted QB, in what is shaping up to be one of the most impressive recruiting classes ever seen in Happy Valley.

Kevin Draper, (6th year senior, liberal arts) was one of the first to vent his frustration:
"It's like Fall of 2005 all over, man. Back then, we were coming off of a 4-7 season, Joe would do nothing about the current state of the program we cherish. I mean, my parents had to shell out $140 on freshman season tickets, and, like, he only had gotten one real recruit that year. So yeah, me and my roomate decided to go to his house that August and let him know how we felt. He kicked us off the lawn. This is exactly the same thing; Joe is letting us down again by stockpiling talent at one position when scholorships can be used to fill in other positions."

I then reminded Kevin that competition is good, PSU is getting monster recruits, and is looking to go to the Rose Bowl, or maybe go all the way. The delayed response I got was "FUCKING PIGS WOOOOOOOOOOOOOOOOOOOOOOOOOORIIIIIIIIIOTTTTTTTTT!!!!" Kevin was then mercifully pepper sprayed and detained by State College police.

Steve Head (junior, astronomy) echoed the sentiment of the crowd:

"The FUCK, MAN? We got Jones and Newsome, but now we get another awesome quarterback? What is wrong with the coaches? It's like, there is such a thing as having too much talent at one position. Ideally you actually want a top qb pick every other year so that you don't have a bunch of top talent guys receiving scholarships who are riding the pine. Additionally, it gives your number one the playing time he needs to mature into his position, like Morel.......PIIIIIIIIIGSSSSSSSSS FUCKIN' PIGGGGGGGSSSSSSSSSSSSSSSSSSS"

Steve then threw a garbage can through a window and then urinated in the street before being chased by the authorities.