The Ohio State Has Their Buckeyes...

Crikey. At the beginning of the year, most of us had the Lions with a loss at this point in the season. Now we roll into Columbus for a night game at the 'Shoe, ranked #3 with national championship aspirations. I don't even play for either team, and am incredibly nervous already. I can only imagine how the starters feel. But hey, that's why OSU players get payed the big bucks (ed-bad puns and hate already flowing), eh?

Reasons why we can win in Columbus:
1) Pryor can't pass the ball. Yet.
2) Bradley has scouted Pryor for the past 3 years in Jeannette, and was the lead recruiter on him.
3) When the PSU run is stopped, we can pass. If the pass isn't working, we can run.
4) While the OSU defense is arguably the best in the Big10 11(especially their corners), they are VERY soft over the middle.
5) Tressel cannot vary his offensive strategy too much on a game-to-game basis.

Reasons we can lose:
1) PSU comes out flat, like they have in the past few games.
2) PSU rushes 4 the entire game. We did this last year and got picked apart (not likely, given #1 under why we win). Same with Michigan last week.
3) Hull and Sales start and remain in the game.

So its very simple (kinda); on defense, rush 5-6 on every play, keep Wells and Pryor contained. I don't even care if we get burned by Pryor in the air on a few plays. He will f up. For proof, look how Wisconsin played him. Granted, Pryor finally broke through at the end, but the lessen should have been learned from tape of said game.

On offense, go deep early, and crack the secondary. Clark cannot fumble the ball. Our most consistent running play for the year is off right tackle. Keep pounding it there.

Actually, that was the game plan for PSU going into Madison.

Music I'm using to get my head right before game:

The enginerd in me just squealed a little. Hell, might as well keep going with that late 80's/early 90's goodness. That's Eric B and Rakim, bitches.....

...and then Big Daddy Kane. Yes, the "Juice" soundtrack was one of the best ever. So was "Purple Rain". What of it?

And yes, I am aware that I might be the whitest man ever.

Posted by drozz at 5:01 PM No comments: Links to this post

The Good(for the entire game) 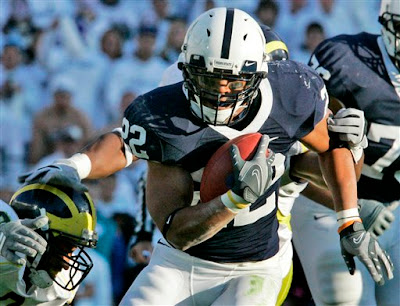 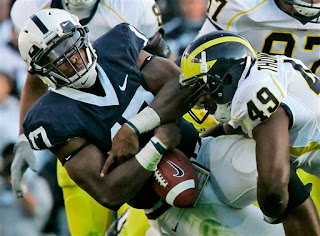 The above pic is a metaphor for the way PSU came out, and that's just because I couldn't find a picture of the first snap sailing over Clark's head. We come out flat, let the other team hang around, and then started playing. Some say that this only makes us stronger. I say bullshit-adversity is faced against good teams in dire situations. When this kind of adversity is overcome, the team gets confidence.

We (the royal we), however, created our own problems by taking 1.5 quarters of vacation. This trend is unsettling, and has happened in too many games played this year.

Other than the offensive miscues (pun intended), WTF was going on with the defense? Every running play, and thus 95% of all plays which were executed by the Michigan offense, were inside the tackles. Yet we backed off, made horrible reads, were pushed around by the Michigan OL, and provided no pressure in the backfield. Early in the first quarter, with Michigan going for it on 4th and short, Bowman had a guy in the backfield (eerily similar to the play he made last week against PJ Hill). He made the hit, and then inexplicably let the guy go. Upon review, it looked like Odrick might have swept his feet out while he was making contact, but still.

It seemed like once we subbed out Hull and Sales, the problems kind of disappeared. We played the run correctly, and figured out that Threet is no threat downfield. After that, we just had to make a play every 3 downs or so and watch Michigan destroy itself. The offense relied on Butler and Royster, which turned out to get the job done without any Spread HD playcalling. It is noted that Hull and Sales were inserted back in the lineup with more positive results.

My insane theory on what the gameplan against Michigan was?

OSU on Saturday night. They are ranked #9, and we are #3. The setting represents past failure, and the last large obstacle to PSU football salvation.

In keeping with my insane theory, I pray PSU will come out with something OSU has never seen before in a PSU defense. Hopefully, it is something along the lines of a 3-4, with Maybin mirroring Pryor. This is similar to what the Eagles do against mobile QBs. Pryor has proved himself as a talented running QB, but not really a passing one. Yet.

The trick is, how do you contain Wells?

Lastly, if we come to Columbus with the execution seen in the first 25 minutes of last game, we will get smoked.

Posted by drozz at 1:55 PM No comments: Links to this post