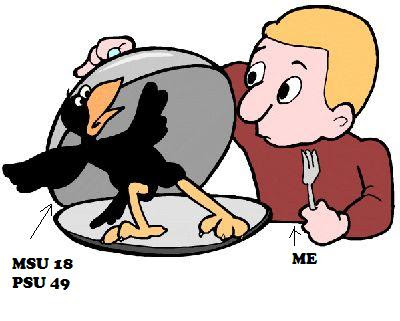 So yeah, I was close in my predictions. Kind of. Well, maybe not. OK Kreskin, anyone who knew PSU was going to hang 49 on MSU, raise your hands. Didn't think so.
PSU came out sharp, executed, and kept those green helmets spinning all day long. I cannot remember a senior day where the seniors contributed so much. I am going to miss these guys next year, especially the receiving corps. Conversely, Odrick announced he is coming back, so look forward to another season of me slobbering all over him. Let's just hope Maybin does likewise.
Lastly, anyone know what Dantonio was doing taking two timeouts in the final minute of the game? Was it a protest? I don't get it.
Other Notes from the Weekend:
Posted by drozz at 9:53 AM 1 comment: Links to this post