Because I am bored, and need to flex my imagination....

Know Your Lions
As previously stated, it's very easy to watch PSU football, get lost in the game, and merely look at our players as athletic pawns in a college system. This cannot happen. These boys that lock it up for our entertainment every weekend are real kids. They have back stories and personalities far more diverse than the humble jerseys they don. Thus, it is the object of these posts to provide the reader with a glimpse of what these guys are really like.

In staying with the defensive line, the next badass to be exposed herein is #91, Jared Odrick.

Or, as the opposition skill players call him, "Oshitpleasegodno". Don't know how this is extrapolated from "Odrick", but football players are a funny bunch.

Anyhoo, the following was a list of questions posed* to Jared via questionnaire, and his written responses follow.

Q: What do you feel gives you the advantage at your position?
A: Size, strength and speed in combination with technique. Also, coach Johnson gave me a wristband to be activated during the game that cuts off the flow of blood to my hand on passing downs. Makes it bigger. Quarterbacks hate that.

Q: What do you eat before the game to keep your strength up?
A: Eat? No sir. I drink only the purest Venom (ed-the following illustration was actually provided by Jared**. Note the above-mentioned apparatus). 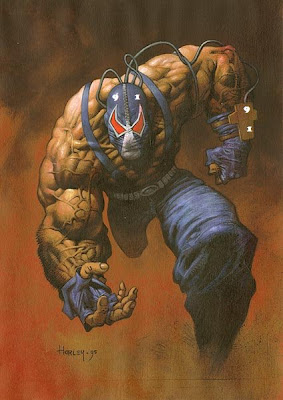 Q: What music do you listen to on game day?
A: Coach Johnson made me a mix of sounds he recorded in a Kansas City slaughterhouse interwoven with the Notre Dame Fight Song. It gives me the blood-fever. After 45 minutes of exposure, I'm ready for the game.

Q: Favorite JoePa memory?
A: Joe came to visit me my senior year in high school on a recruiting trip. I didn't think much of him until he challenged me to a Rochambeau. He even let me go first. I lost after a 20 minute struggle, but Joe promised if I came to PSU and graduated I would get a rematch.

Q: What is best?
A: To crush your enemies, see them driven before you, and to hear the lamentation of the cheerleaders.

*hypothetically
**not provided
Posted by drozz at 1:52 PM No comments: Links to this post

Up North, the Wolverines

It's been awhile-work tends to pile up when you are away on road trips. And slack off. And have unlimited computer access at work and are easily distracted by shiny objects and a Phillies' playoff run. So yeah, I've been busy. Moving on.... 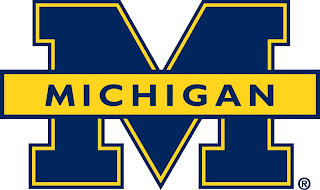 So this week the Wolverines (2.0) come into town. They bring with them baggage and failure, which is fine with me. The problem is, as a whole, I just can't hate Michigan. I don't know why; maybe it's because they are traditional rivals to Notre Dame. Or their fans were incredibly nice to us on our road trip last year.

What I do not like about Michigan is the little things. Let's start with the stadium: 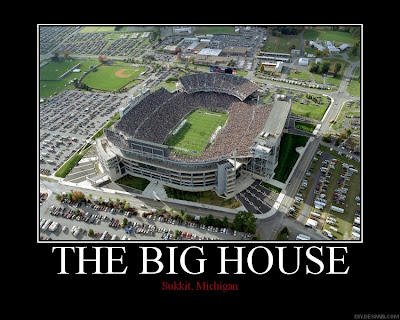 Other than that, I really don't have a problem with their fans, except for item #2 above. I have never noticed the arrogance theory other blogs ascribe to.

That being said, I hope we stomp them new mudholes this year. Eleven years is a tough run for any team. Trust me, I have a vested interest in Philadelphia sports.

Michigan is in a transition year offensively. They have no QB to run RichRod's spread attack, new RBs, and an entire set of inexperienced WRs (which is going to look somewhat familiar to us next year). I fully expect Michigan to come in and run the offense we saw vs. Notre Dame last year, or Wiscy last week. Nothing flashy, just short passes and vanilla running to avoid potential screw-ups. I fully expect PSU to rush 5 or 6, with blitzing LBs providing different looks. Maybin will again act thussly: 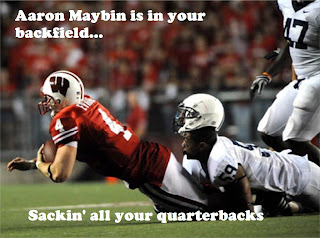 Michigan does not have a bad defense. In fact, they have a very underrated defensive front seven. What frightens me, and consequently could be the only thing keeping Michigan in this game, is forced turnovers. I take solace in our starters' past few games performance. Clark has shown almost preternatural decision making and accuracy. Royster knows Lawlor and the O-Line will provide the running lane needed, and the starting WRs all have veteran experience.

We have Williams and Kelly, the latter being an asset this year. Emporer Zoltan might be one of the best punters in the universe, but he doesn't kick field goals or act as a return man. Provided Boone is marginal, PSU maintains a clear advantage. Unless Williams loses a fumble.

All signs point to PSU blowing out this Michigan team. How can Michigan possibly win?

All the above seem improbable. Still, I will not signal victory until the clock runs down.

We should have won last year but failed. We better win this year, because Michigan will not be down for long.

EDIT: Most PSU and Michigan blogs have that fateful final play in the 2005 game. That clip will never be posted here. EVER. I can't look at that clip without that feeling of despair and loathing over what could have been. If I were to post it, I would most likely blackout and wake up in a prison cell covered in blood and confusion.

Posted by drozz at 10:23 AM No comments: Links to this post