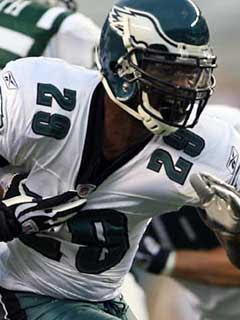 A little over a week ago, PSU football alumnus/Tennessee nightmare Tony Hunt was asked to play FB on the Iggles. Not a bad move. Andy Reid finally realizes that kind of talent just can't be bottled up on the sideline. The only problem I have with this move is the timing; why wasn't this done at the end of last season? Now, Tony has to move to a position he is only slightly familiar with in an exponentially more intricate offense.
So how has Tony performed? Depends. As far as FBs go, he is marginal-he just lacks size. If he had the opportunity in the offseason to gain some weight, it might change things. That being said, I am currently going over the last two dvr'd games, and I have to admit: I am kind of excited about this.
Tony, at FB, has thusfar excelled in blitz pickup, as well as picking up a LB last night in a run blitz. He made an outstanding play on special teams, and has caught the ball with great poise out of the backfield. The first half was going great for him against the Jets' scrubs-he did all main functions of a FB (lead blocking, pass blocking, and short yardage). However, the last play wherein he was the lead blocker for Booker, he reverted to a RB, hit the hole hard, and didn't wait for Booker to follow him. The result was a Jets LB shooting the gap and making an easy play. His only mistake, really.

In short, I am happy with this move-Tony gets some serious PT, and a chance to show what he can do. He is still marginal in lead blocking, but he showed good signs of improvement last night, albeit against the backups.
/takes off Iggles glasses.

Now that the bias is removed, I would hate this move if I were a non-Iggles PSU fan. Why? Tony is a RB. He is a punishing, between the tackles bruiser who gets better with every carry during the game. Moving him to FB might get him some more experience, but not at the position he was designed for. The Eagles should release him, and let another team put him in his natural position. Which looks like this: 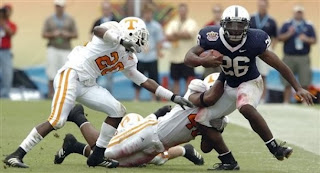 /puts glasses back on
In looking at the RB situation, it would appear that this move is most likely temporary. In this case, Buckhalter is in the last year of his contract, and Booker isn't going anywhere. After Buck is gone, Tony slides back to RB, and in 3 years is a compliment to Booker (should be other way around-ed) as Westbrook winds down.
Posted by drozz at 7:56 PM